Combo charts for trend analysis can help you discover correlations that might exist between several values over time or by category. Go way beyond Qlik's native capabilities with our new Combo Chart extension! 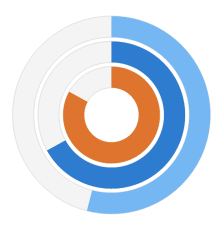 Gain freedom in effectively visualizing your KPIs using our Circular Gauge extension for Qlik Sense! With new options for viewing your KPIs, you'll find our gauges to be flexible beyond the standard ones in use today. 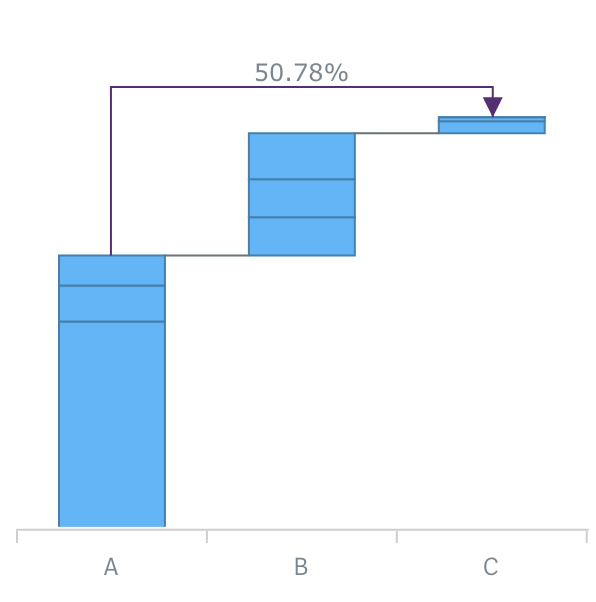 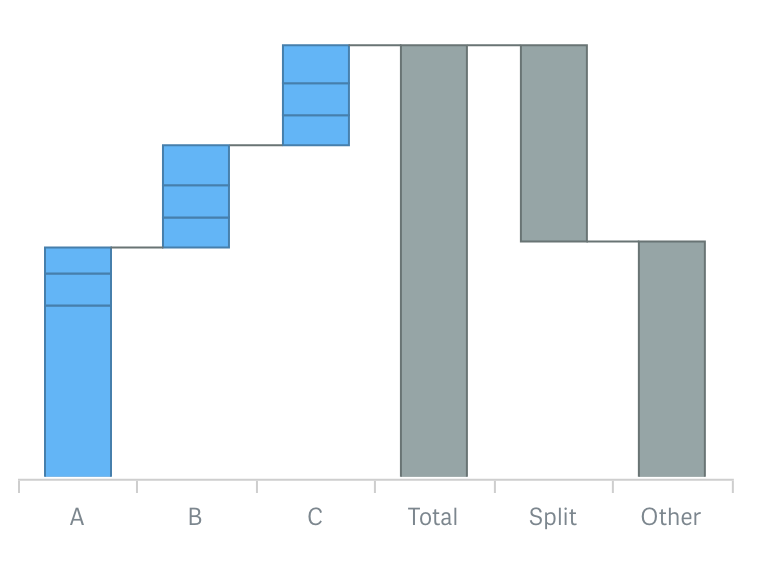 Now you can use a split display of the total category to provide for context and clear view of the elements total value consists of. 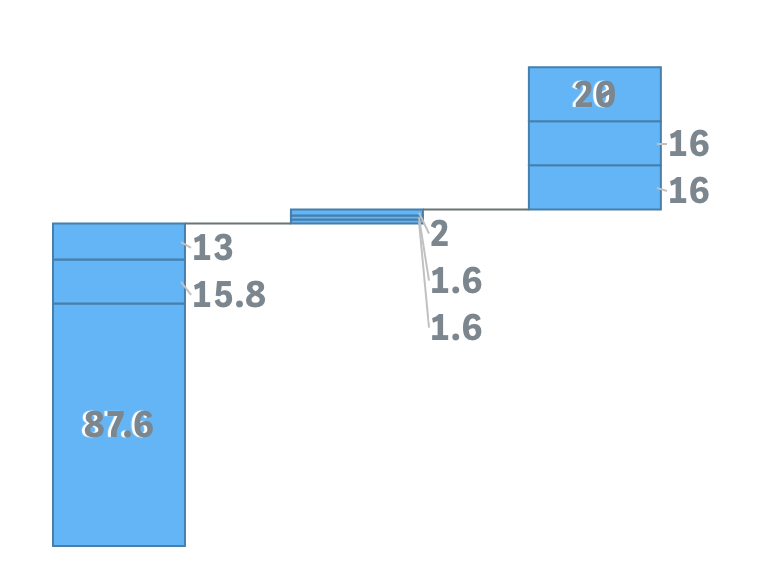 Stacked AnyChart Waterfall Extension for Qlik Sense now has a special option for small values in stacks: labels can be displayed right beside the stack or hidden if values defined by a certain threshold are irrelevant to the analysis. 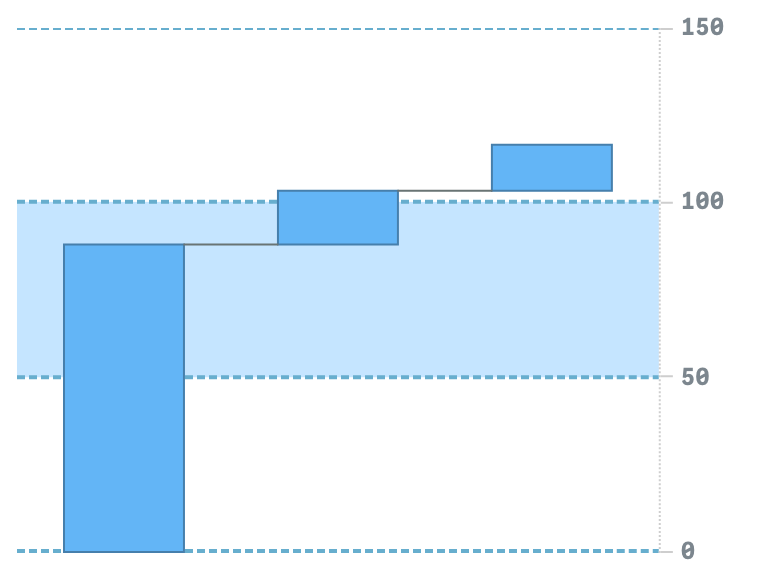 Waterfall charts now have extended axes and grid settings giving you an option to give charts a more appealing and informative look. 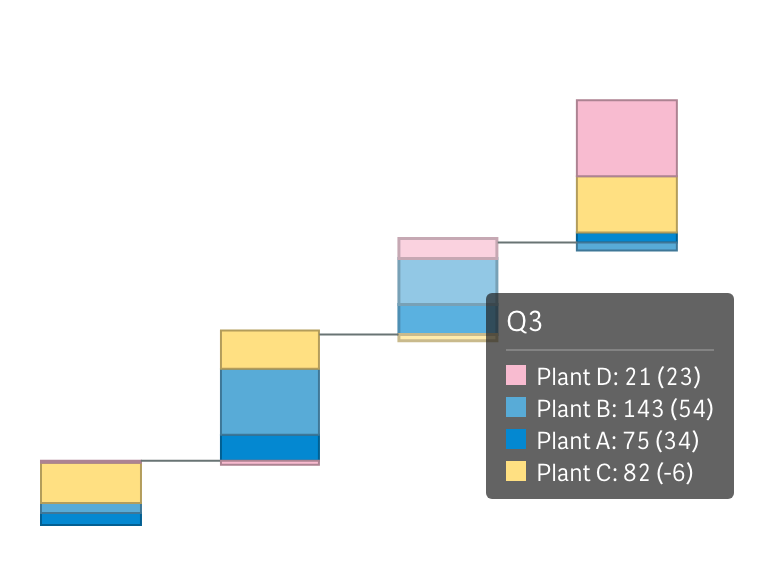 Stacked Waterfall charts now have an option to show one tooltip for a stack instead of separate, allowing users to see all information about elements accompanied by proper color legend. 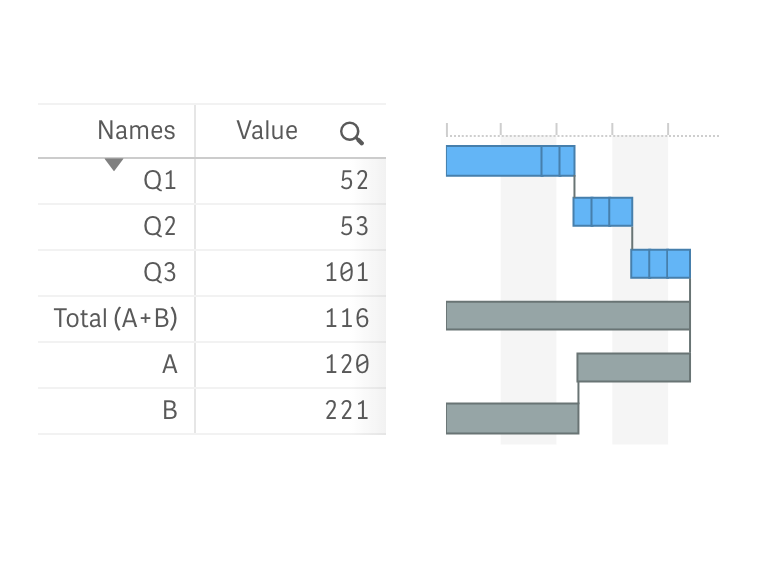 All Waterfall charts can now be shown vertically, allowing you to place them against a table and provide information in more telling context.

AnyChart is proud to present a unique Bullseye Chart Qlik Sense Extension. Bullseye chart is an excellent graphical tool to be used with data that is both quantitative and continuous in measurement, such as a measured dimension or time (variables data). The Bullseye chart is perfect when you need to estimate whether each of two parameters is within its desired or expected range.

Bullseye charts are commonly used in drug development in healthcare and pharmaceutical industries, as well as any other case when phases or stages need clear visualization, and range tracking across multiple parameters are required.

Waterfall Chart (or Mario Chart, Bridge Chart, or Flying Bricks Chart) is widely used for analytical purposes.This chart type facilitates the analysis of processes (sales, production, research, and so on), especially when it comes to exploring or communicating transitions between the stages in a process.

Our waterfall charts stand out from the crowd by being able to get data both as absolute values for each state and as differences between the states, support of several stacking modes - either by measures or by dimensions, and ability to show totals and subtotals.

New Sunburst Chart is the first chart in the reimagined set of AnyChart extensions - AnyChart v4. Easier to use, straight to the point visualizations with native Qlik experience.